One double duvet vs two single duvets? A review of what couples do by Country 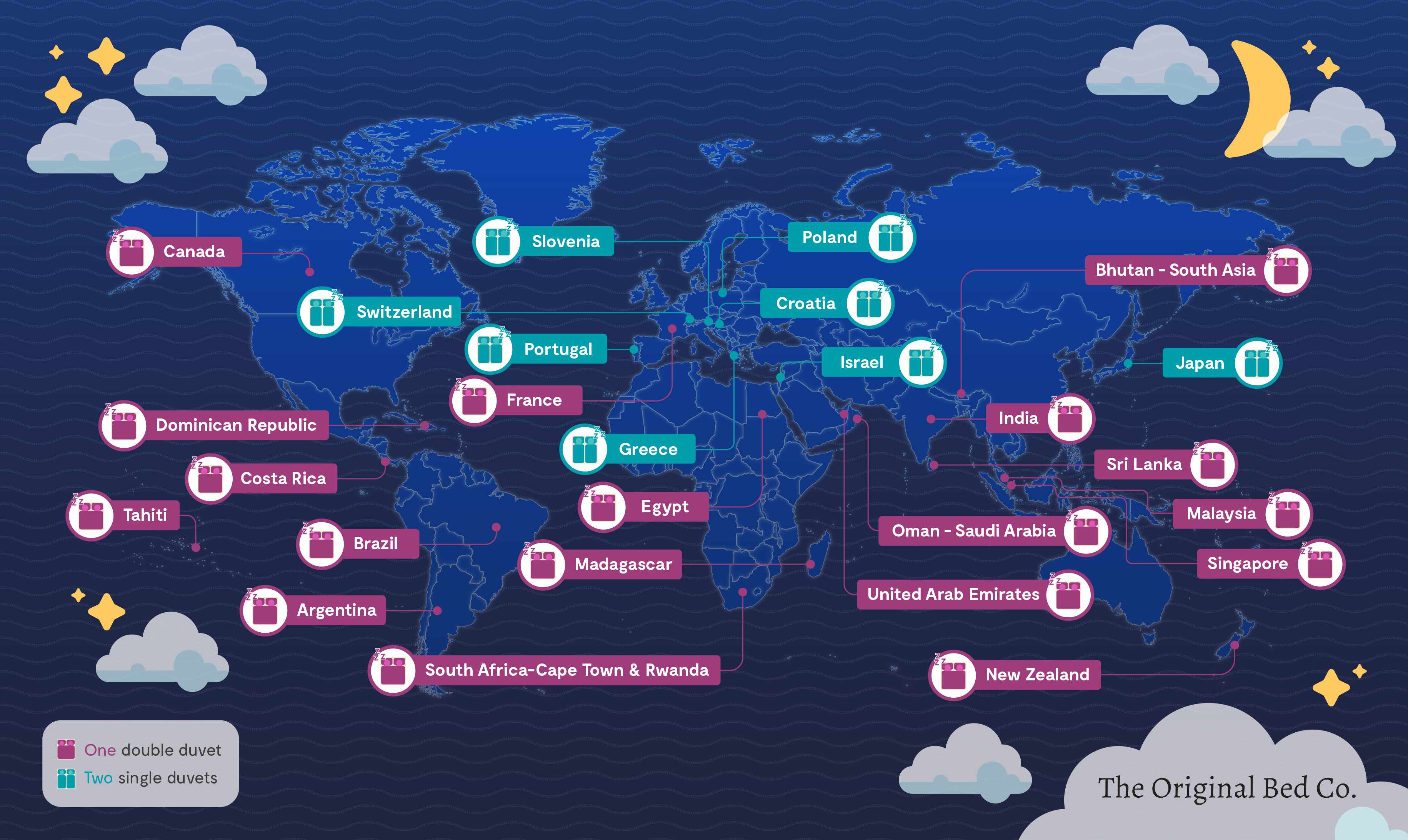 Many of us will face disturbances throughout the night, mainly from a partner and their sleeping habits… could one bed, two duvets be the answer? Duvet stealing may well be one of the most annoying factors when it comes to sharing a bed, however, many places from around the world have adopted the “two duvet system” in a bid to achieve a perfect night’s rest.

Getting a good night’s sleep is most important, especially whilst you are on your travels. Whether you are travelling near or far, holidaying is the perfect opportunity to relax and re-charge your batteries.

A recent sleep survey conducted by Hastings Hotels revealed that 13% of UK adults find duvet hogging the second most annoying characteristic when it comes to sharing a bed with a partner.

With Forbes releasing their “Top 27 Countries to Travel To in 2020”, we have investigated into each of these destinations to find out where you will be able to enjoy your own duvet or whether you will be sharing with your travel buddy!

The “two-duvet” system is known to originate mainly from Scandinavian and Nordic countries [1], many will question this wacky method; however, Europeans swear by it! Ditching the double duvet and opting for two singles is believed to help both you and your partner achieve a great night’s sleep.

The use of two single duvets ultimately avoids couples going head to head in a “tug of war” scenario each night. In addition to this, it also allows you to freely control your body temperature.

Travel bloggers have taken to their platforms to share their fascination with this typically European way of sleeping. Mostly sharing their positive experiences with “the two-duvet system” which can mainly be found in hotels across Europe. The topic of two duvets on one bed is rather controversial, however many have raved how well this had worked for themselves and their partners. Most find they become hooked on the two-duvet system whilst on holiday, later discussing how this will be adopted in their own homes.

Inspired by this conversation, we took to Twitter to see what other people thought of sleeping with two duvets:

2 duvets on one bed has changed my life.

@hanahbissell @hfxginger I have 2 duvets on bed for me, one for her + blanket for me.

If you are planning a trip away this year with your partner, take a look at our world map to see where you will find a great night’s sleep.

Our research into these 27 countries has shown that travellers heading to European countries such as Slovenia, Poland, Portugal and Greece should expect to find the “two-duvet” system, however, this practise is not so common in France. Outside of Europe, in Japan you may also find yourselves with two duvets on one bed, however, it is far more likely that you will end up with two separate beds altogether! Research has shown that it is extremely common in Japanese culture for couples to sleep separately, as they wish to remain free of disturbances and so, find sleeping apart is key for achieving restful sleep. [3]

The remaining countries such as New Zealand, Canada, and Egypt are yet to adopt this ingenious two duvet system. However, duvets are rarely used in countries with much hotter climates such as Brazil and India, instead, they use lightweight cotton quilts and top sheets which are far more suitable for staying cool throughout the night.